“We are pleased to announce another strong quarter of operating results. Property NOI is up over 32% and same store NOI is up 7.6% over the prior year. These results demonstrate the ongoing successful execution of our strategic initiatives. We continue to realize attractive returns on our value-add unit renovation investments along with accretively growing our portfolio with well-located, high quality properties,” said Ramin Kamfar, Company Chairman and CEO. “We again covered our dividend and are pleased with our industry-leading performance. With a robust pipeline of opportunities, we remain committed to our investment strategy and are optimistic about our outlook.”

Financial Results
Net loss attributable to common stockholders for the fourth quarter of 2018 was $12.8 million, compared to $46.2 million in the prior year period. Net loss attributable to common stockholders included non-cash expenses of $17.7 million or $0.75 per share in the fourth quarter of 2018 compared to $49.8 million or $2.02 per share for the prior year period.

CFFO for the fourth quarter of 2018 was $6.3 million, or $0.20 per diluted share, compared to $4.3 million, or $0.14 per diluted share in the prior year period. CFFO adds back non-cash, non-operating expenses such as accretion on the Company’s Series B preferred stock. CFFO was primarily driven by growth in property NOI of $6.6 million and interest income of $3.5 million arising from significant investment activity. This was primarily offset by a year-over-year increase in interest expense of $4.4 million, general and administrative expenses of $1.5 million, and preferred stock dividends of $1.9 million.

Property NOI margins expanded by 160 basis points to 60.5% of revenue for the quarter, compared to 58.9% of revenue in the prior year quarter.

The Company’s same store portfolio for the quarter ended December 31, 2018 included 24 properties. For the fourth quarter of 2018, same store NOI was $19.1 million, an increase of $1.3 million, or 7.6%, compared to the same period in the prior year. Same store property revenues increased by 5.5% compared to the same prior year period, primarily attributable to a 4.8% increase in average rental rates, as well as average occupancy increasing 80 basis points to 94.6%. Same store expenses increased $0.3 million, primarily due to $0.15 million related to payroll, $0.11 million in maintenance, and $0.09 million of increased real estate taxes.

Renovation Activity
The Company completed 1,186 value-add unit upgrades during the year, including 339 units during the fourth quarter.

Since inception within the existing portfolio, the Company has completed 1,666 value-add unit upgrades at an average cost of $4,824 per unit and achieved an average monthly rental rate increase of $104 per unit, equating to a 25.9% ROI on all unit upgrades leased as of December 31, 2018. The Company has identified approximately 4,800 remaining units within the existing portfolio for value-add upgrades with similar projected economics to the completed renovations. The Company expects to complete between 900 and 1,200 unit renovations in 2019.

Acquisition Activity
On November 15, 2018, the Company acquired an 85% interest in a 512-unit apartment community located in Lakewood, Colorado, known as Ashford Belmar. The total purchase price was approximately $143.4 million, funded in part by a $100.7 million mortgage loan secured by the Ashford Belmar property.

As of December 31, 2018, the Company had $24.8 million of unrestricted cash on its balance sheet, approximately $48.3 million available among its revolving and term credit facilities, and $1.3 billion of debt outstanding.

Dividend
The Board of Directors authorized, and the Company declared, a quarterly dividend for the fourth quarter of 2018 equal to a quarterly rate of $0.1625 per share on its Class A common stock, payable to the stockholders of record as of December 24, 2018, which was paid in cash on January 4, 2019. A portion of each dividend may constitute a return of capital for tax purposes.

2019 Guidance
Based on the Company’s current outlook and market conditions, the Company anticipates 2019 CFFO in the range of $0.80 to $0.84 per share. For additional guidance details underlying earnings guidance, please see page 31 of Company’s Fourth Quarter 2018 Earnings Supplement available under Investor Relations on the Company’s website (www.bluerockresidential.com).

Portfolio Summary
The following is a summary of our operating real estate and mezzanine/preferred investments as of December 31, 2018: 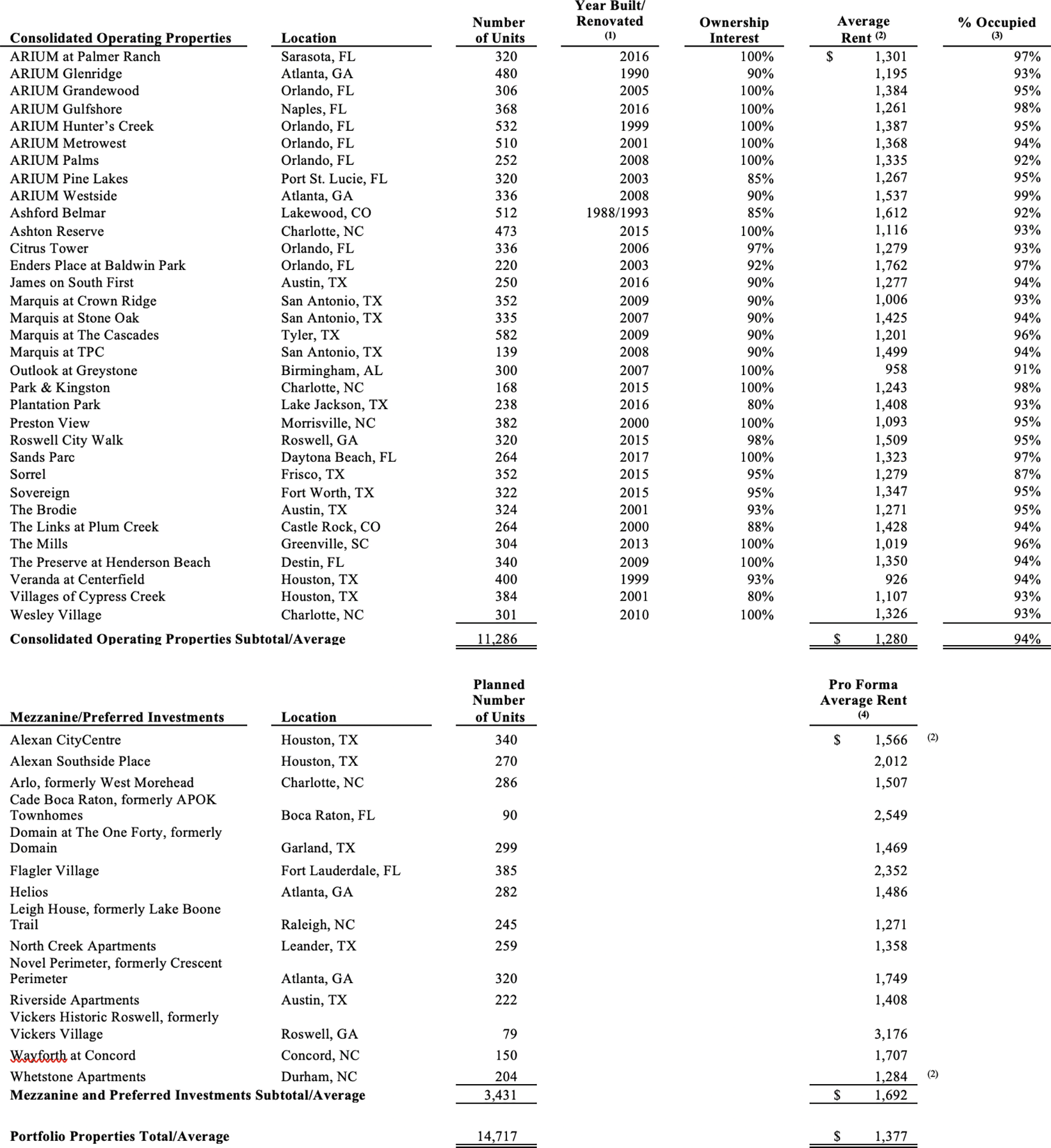 (1) Represents date of last significant renovation or year built if there were no renovations.
(2) Represents the average effective monthly rent per occupied unit for the three months ended December 31, 2018.
(3) Percent occupied is calculated as (i) the number of units occupied as of December 31, 2018, divided by (ii) total number of units, expressed as a percentage.
(4) Alexan CityCentre, Alexan Southside Place, Helios, Leigh House, North Creek Apartments, Riverside Apartments, Wayforth at Concord, and Whetstone Apartments are preferred equity investments. Leigh House has the option to convert to indirect common interest in the property once the property reaches 70% occupancy. North Creek Apartments, Riverside Apartments, and Wayforth at Concord have the option to purchase the property at stabilization. Arlo, Cade Boca Raton, Domain at The One Forty, Flagler Village, Novel Perimeter, and Vickers Historic Roswell are mezzanine loan investments. Additionally, Arlo, Cade Boca Raton, Domain at The One Forty, and Vickers Historic Roswell have an option to purchase indirect property interest upon maturity.

Consolidated Statement of Operations
For the Three and Twelve Months Ended December 31, 2018 and 2017
(Unaudited and dollars in thousands except for share and per share data) 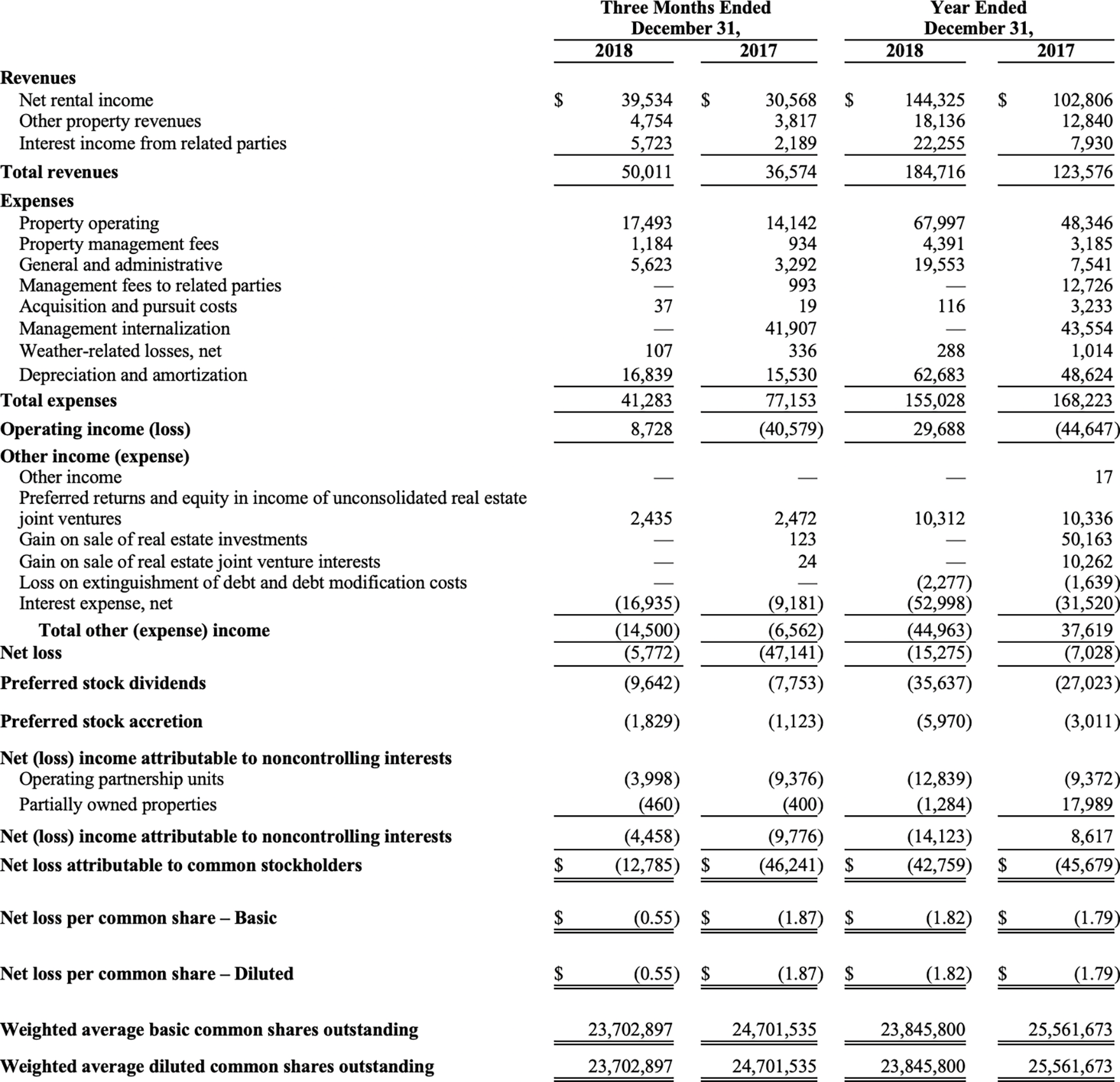 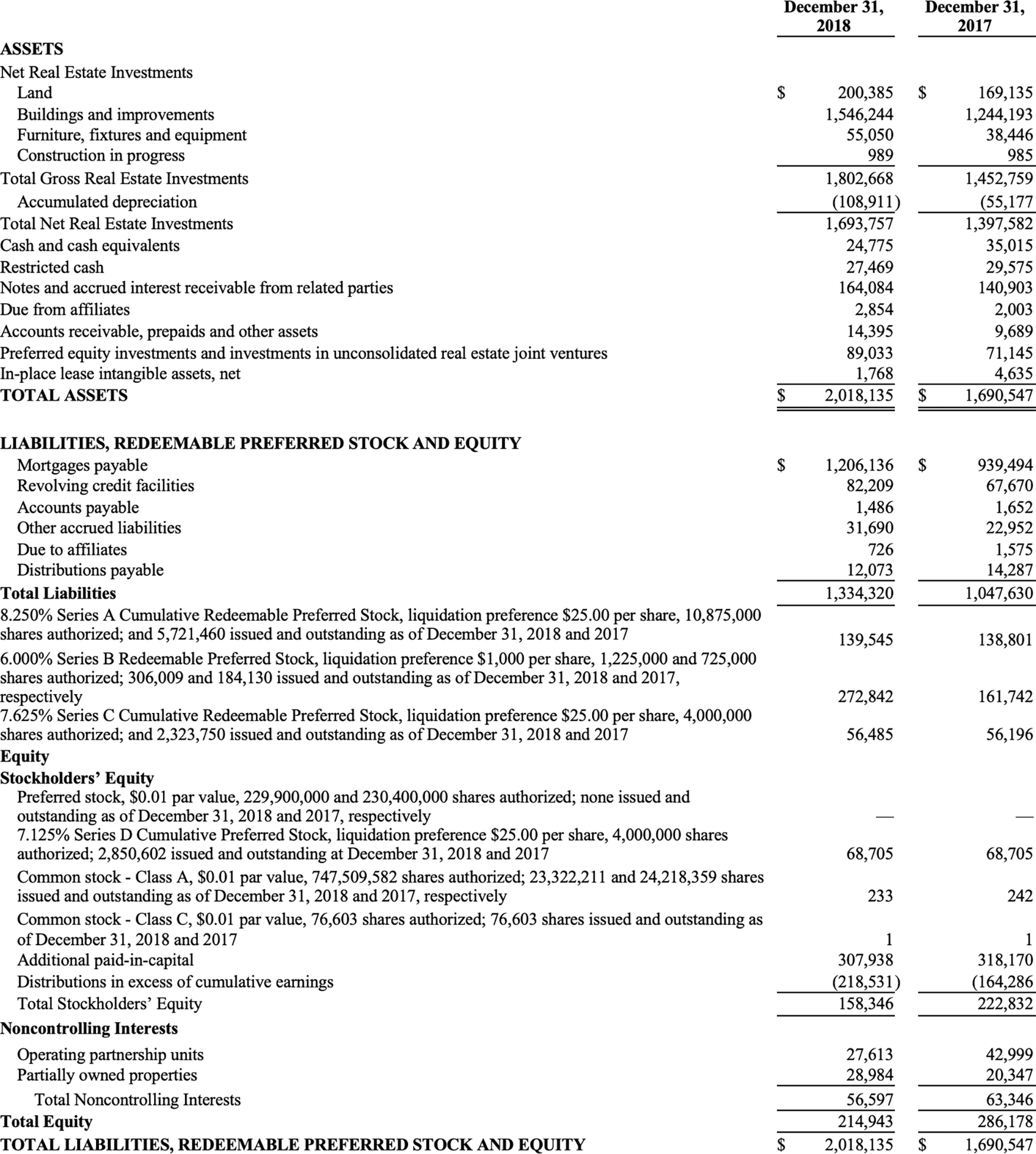 CFFO makes certain adjustments to FFO, removing the effect of items that do not reflect ongoing property operations such as stock compensation expense, acquisition expenses, unrealized gains and losses on derivatives, losses on extinguishment of debt and debt modification costs (includes prepayment penalties incurred and the write-off of unamortized deferred financing costs and fair market value adjustments of assumed debt), non-cash interest, one-time weather-related costs, and preferred stock accretion. We believe that CFFO is helpful to investors as a supplemental performance measure because it excludes the effects of certain items which can create significant earnings volatility, but which do not directly relate to our core recurring property operations. As a result, we believe that CFFO can help facilitate comparisons of operating performance between periods and provides a more meaningful predictor of future earnings potential.

AFFO makes certain adjustments to CFFO in order to arrive at a more refined measure of the operating performance of our portfolio. There is no industry standard definition of AFFO and practice is divergent across the industry. AFFO adjusts CFFO for items that impact our ongoing operations, such as subtracting recurring capital expenditures (and while we were externally managed, when calculating the quarterly incentive fee paid to our former Manager only, we further adjusted FFO to include any realized gains or losses on our real estate investments). We believe that AFFO is helpful to investors as a meaningful supplemental indicator of our operational performance.

Our calculation of CFFO and AFFO differs from the methodology used for calculating CFFO and AFFO by certain other REITs and, accordingly, our CFFO and AFFO may not be comparable to CFFO and AFFO reported by other REITs. Our management utilizes FFO, CFFO, and AFFO as measures of our operating performance after adjustment for certain non-cash items, such as depreciation and amortization expenses, and acquisition and pursuit costs that are required by GAAP to be expensed but may not necessarily be indicative of current operating performance and that may not accurately compare our operating performance between periods. Furthermore, although FFO, CFFO, AFFO and other supplemental performance measures are defined in various ways throughout the REIT industry, we also believe that FFO, CFFO, and AFFO may provide us and our stockholders with an additional useful measure to compare our financial performance to certain other REITs. While we were externally managed, we also used AFFO for purposes of determining the quarterly incentive fee paid to our former Manager in prior periods.

We have acquired interests in five additional operating properties and three investments accounted for on the equity method of accounting subsequent to December 31, 2017. Therefore, the results presented in the table below are not directly comparable and should not be considered an indication of our future operating performance.

The table below reconciles our calculations of FFO, CFFO and AFFO to net loss, the most directly comparable GAAP financial measure, for the three and twelve months ended December 31, 2018 and 2017 (in thousands, except per share amounts): 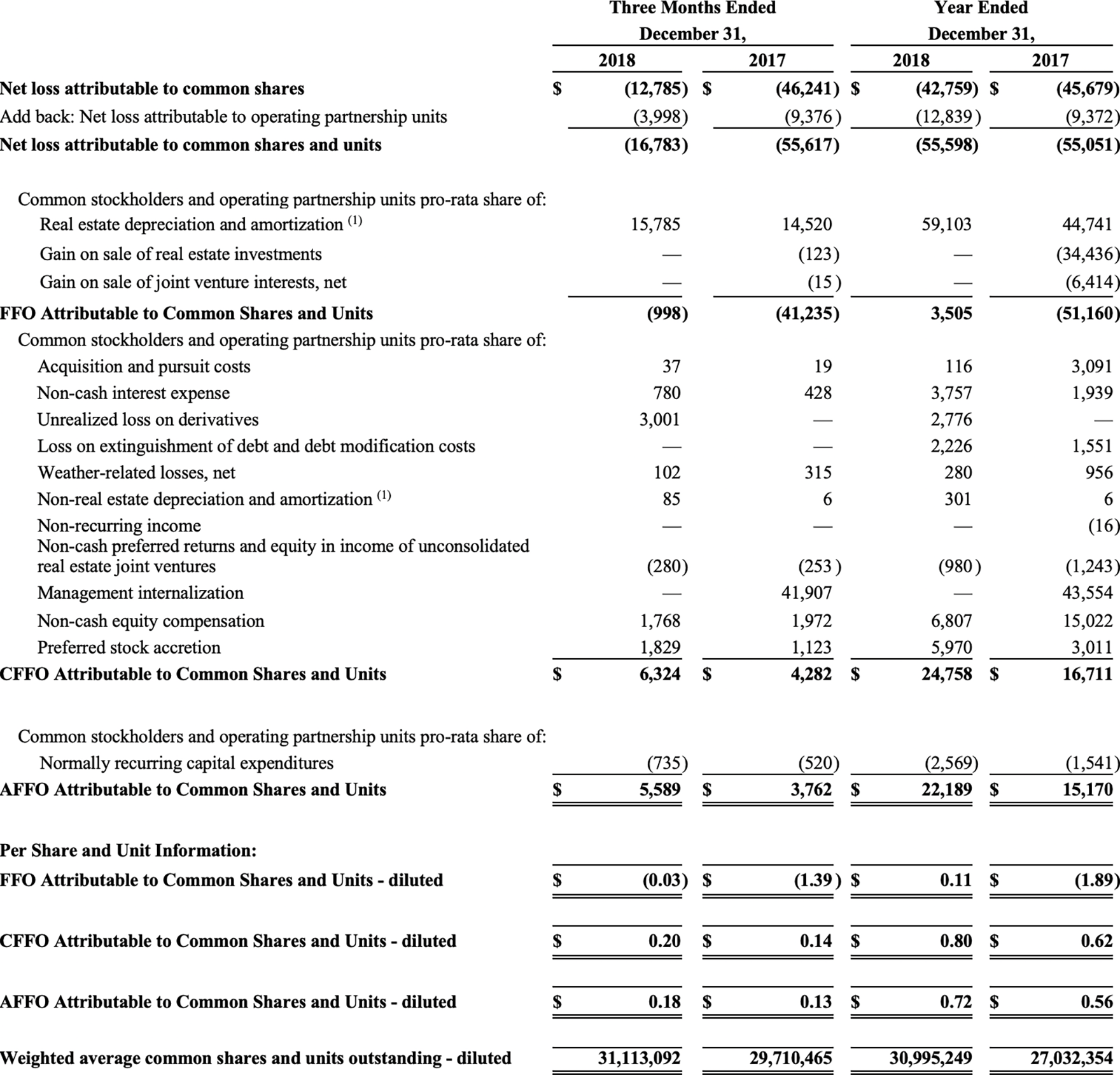 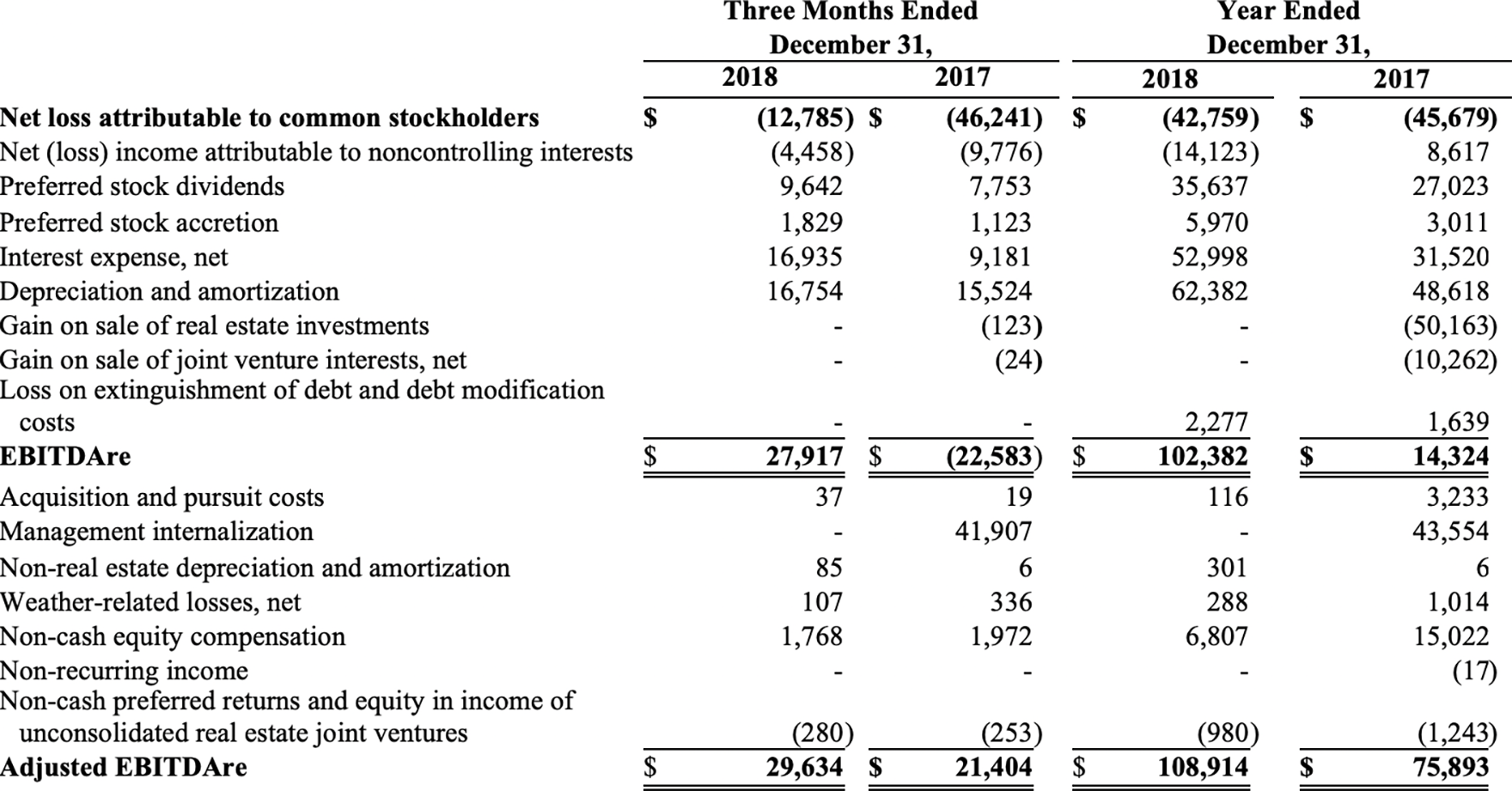 Certain amounts in prior periods, including related to tenant reimbursements for utility expenses amounting to zero and $3.0 million for the three and twelve months ended December 31, 2017, have been reclassified to other property revenues from property operating expenses, to conform to the current period. In addition, property management fees have been reclassified from property operating expenses. 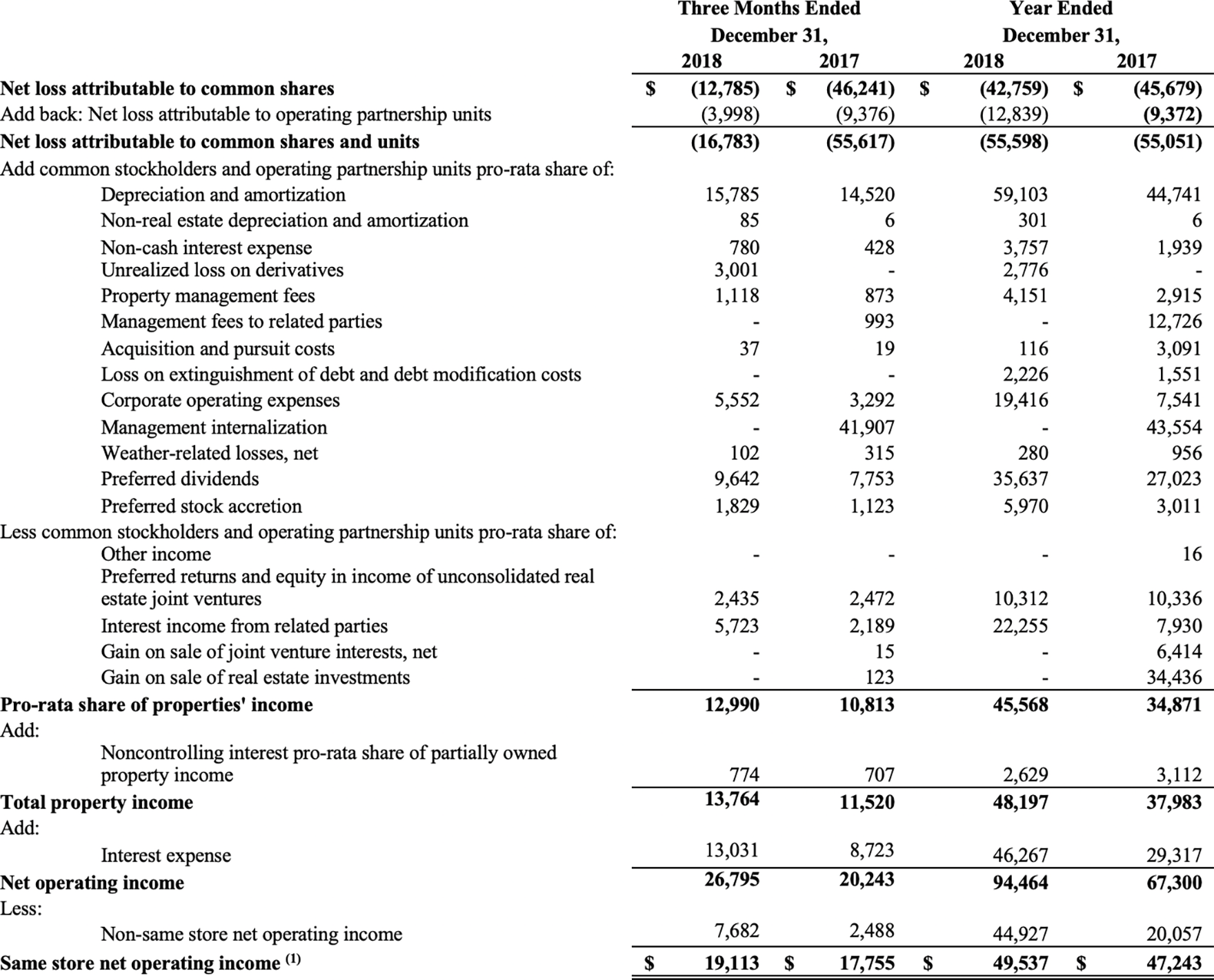