“The fourth quarter topped a productive year for BRG, as we delivered same-store NOI growth of 5.8% for the year, and completed over $629 million of investments to fuel our ongoing growth. This included an active fourth quarter where we acquired three operating assets and invested in three preferred equity investments,” said Ramin Kamfar, Chairman and CEO. “We continued to target growth markets and expanded our geographic footprint in the West with acquisitions in Arizona and Washington. We are excited about the growth we anticipate as 2020 progresses and we realize the benefits of our recent acquisitions and proven value-add upgrade program.”

CFFO for the fourth quarter of 2019 was $6.7 million, or $0.21 per diluted share, compared to $6.3 million, or $0.20 per diluted share, in the prior year period. CFFO was primarily driven by growth in property NOI of $1.4 million, interest income of $1.0 million, preferred returns on unconsolidated real estate of $0.2 million arising from investment activity and decreases of $0.7 million and $0.3 million in cash general and administrative expenses and interest expense, respectively. This was primarily offset by a year-over-year rise in preferred stock dividends of $3.2 million.

(1) Including interest income from related parties

Property NOI margins were 61.6% of revenue for the quarter, an increase of 110 basis points compared to 60.5% of revenue in the prior year quarter. Property operating expenses were up primarily due to non-controllable expenses increases.

Same store NOI for the three months ended December 31, 2019 decreased 0.2%, or $0.04 million, compared to the 2018 period. Same store property revenues increased 2.4% as compared to the 2018 period, primarily driven by a 3.6% increase in average rental rates as twenty-four of our twenty-six same store properties recognized rental rate increases during the period. Revenues were moderated by a 120 basis points decrease in average occupancy to 93.6% primarily due to a loss of 27 corporate leases in one asset, and the transition of property management at three assets necessitated by performance issues. Occupancy at the above assets have recovered to 96.2% as of end of January 2020.
Same store expenses for the three months ended December 31, 2019 increased 6.5%, or $0.9 million, compared to the 2018 period, primarily due to non-controllable expense increases. Real estate taxes increased $0.6 million from prior year due to $0.3 million in municipality tax increases and to a $0.3 million real estate tax income item recognized in the prior year. In addition, insurance expenses increased $0.2 million due to industrywide price increases stemming from hurricanes, wildfires, and hail over the last two years.
Renovation Activity

Since inception, within the existing portfolio, the Company has completed 2,645 value-add unit upgrades at an average cost of $5,682 per unit and achieved an average monthly rental rate increase of $111 per unit, equating to a 23.5% ROI on all unit upgrades leased as of December 31, 2019. The Company has identified approximately 4,515 remaining units within the existing portfolio for value-add upgrades with similar projected economics to the completed renovations.

Portfolio Activity
During the fourth quarter, the Company completed investments totaling $270 million. These investments include the following:

The Company repurchased 57,883 shares of its Class A common stock at an average price of $11.79 per share, for a total cost of approximately $0.7 million under its $50.0 million share repurchase plan announced in December 2019.

As of December 31, 2019, the Company had $31.7 million of unrestricted cash on its balance sheet, approximately $83.0 million available among its revolving credit facilities, and $1.4 billion of debt outstanding.

Dividend
The Board of Directors authorized, and the Company declared, a quarterly dividend for the fourth quarter of 2019 equal to a quarterly rate of $0.1625 per share on its Class A common stock, payable to the stockholders of record as of December 24, 2019, which was paid in cash on January 3, 2020. A portion of each dividend may constitute a return of capital for tax purposes. There is no assurance that the Company will continue to declare dividends or at this rate.

On December 20, 2019, the Board of Directors authorized, and the Company declared a monthly dividend of $0.128125 per share of Series T Preferred Stock, prorated on the basis of the actual number of days in the applicable dividend period during which each share was outstanding. Such pro-rated dividends were payable to the stockholders of record on December 24, 2019 and were paid in cash on January 3, 2020.

2020 Guidance
Based on the Company’s current outlook and market conditions, the Company anticipates 2020 CFFO in the range of $0.83 to $0.86 per share. The Company anticipates that earnings growth will be more heavily weighted towards the second half of 2020 as it realizes the upside opportunity from implementation of institutional property management, lease-ups, and value-add renovations at its recent acquisitions. For additional guidance details underlying earnings guidance, please see page 32 of Company’s Fourth Quarter 2019 Earnings Supplement available under Investors on the Company’s website (www.bluerockresidential.com).

The full text of this Earnings Release and additional Supplemental Information is available in the Investors section on the Company’s website at https://www.bluerockresidential.com.

Portfolio Summary
The following is a summary of our operating real estate and mezzanine/preferred investments as of December 31, 2019: 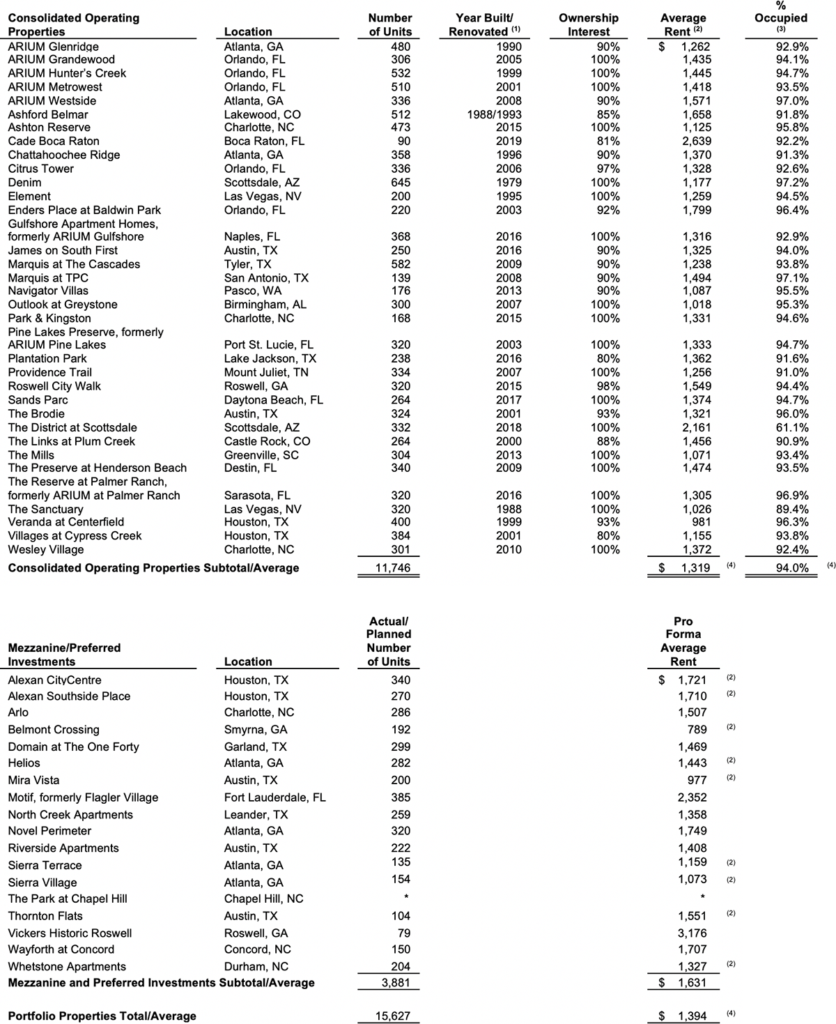 (1) Represents date of last significant renovation or year built if no renovations.
(2) Represents the average effective monthly rent per occupied unit for the three months ended December 31, 2019.
(3) Percent occupied is calculated as (i) the number of units occupied as of December 31, 2019, divided by (ii) total number of units, expressed as a percentage.
(4) Excludes District at Scottsdale, which is in lease-up and Cade Boca Raton, which was consolidated on December 31, 2019 and had no operations for the quarter.
* The development is in the planning phase, project specifications are in process.

Consolidated Statement of Operations
For the Three and Nine Months Ended December 31, 2019 and 2018
(Unaudited and dollars in thousands except for share and per share data) 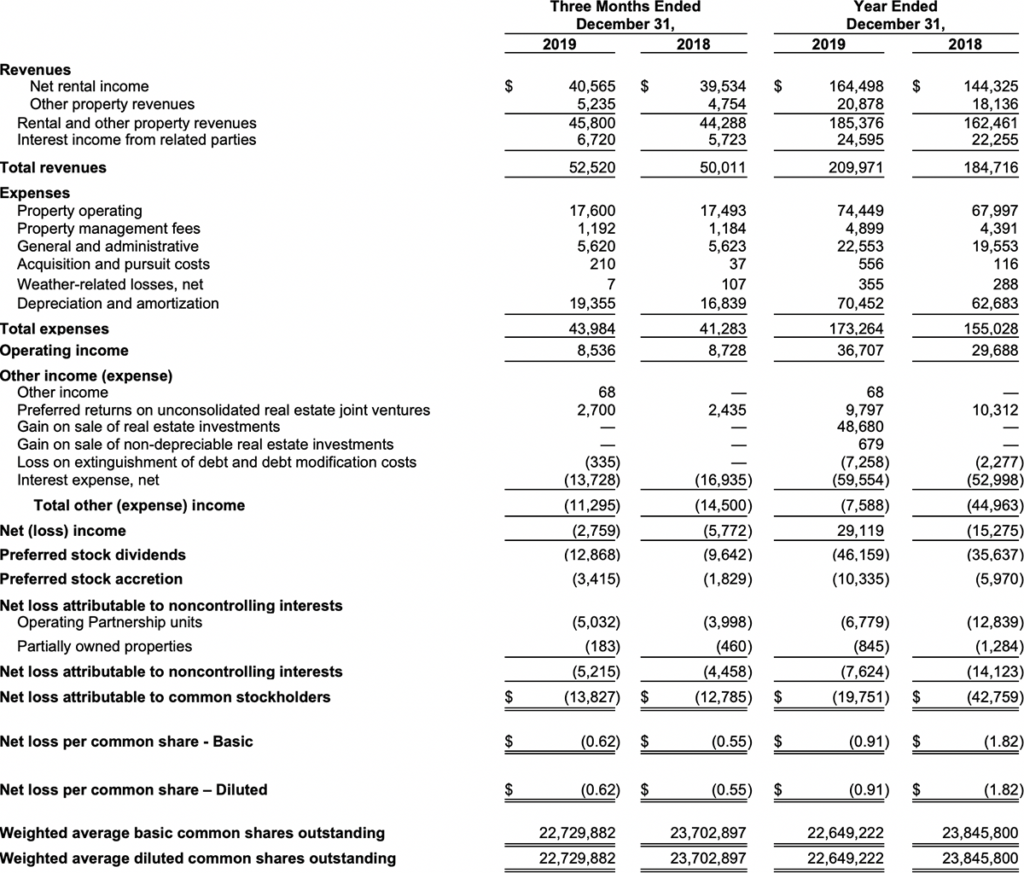 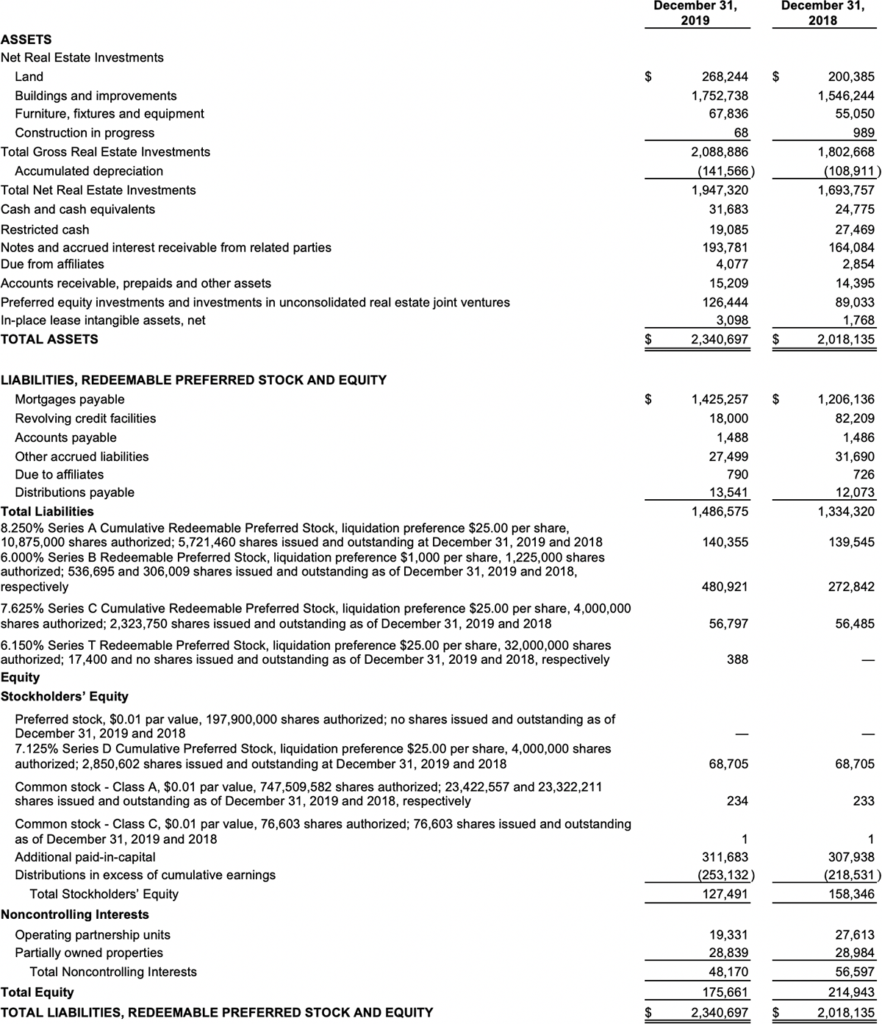 FFO attributable to common stockholders and unit holders is a non-GAAP financial measure that is widely recognized as a measure of REIT operating performance. We consider FFO to be an appropriate supplemental measure of our operating performance as it is based on a net income analysis of property portfolio performance that excludes non-cash items such as depreciation. The historical accounting convention used for real estate assets requires straight-line depreciation of buildings and improvements, which implies that the value of real estate assets diminishes predictably over time. Since real estate values historically rise and fall with market conditions, presentations of operating results for a REIT, using historical accounting for depreciation, could be less informative. We define FFO, consistent with the NAREIT definition, as net income, computed in accordance with GAAP, excluding gains or losses on sales of depreciable real estate property, plus depreciation and amortization of real estate assets, plus impairment write-downs of depreciable real estate, and after adjustments for unconsolidated partnerships and joint ventures. Adjustments for unconsolidated partnerships and joint ventures will be calculated to reflect FFO on the same basis.

CFFO makes certain adjustments to FFO, removing the effect of items that do not reflect ongoing property operations such as acquisition expenses, non-cash interest, unrealized gains or losses on derivatives, losses on extinguishment of debt and debt modification costs (includes prepayment penalties incurred and the write-off of unamortized deferred financing costs and fair market value adjustments of assumed debt), one-time weather-related costs, gains or losses on sales of non-depreciable real estate property, shareholder activism, stock compensation expense and preferred stock accretion. We believe that CFFO is helpful to investors as a supplemental performance measure because it excludes the effects of certain items which can create significant earnings volatility, but which do not directly relate to our core recurring property operations. As a result, we believe that CFFO can help facilitate comparisons of operating performance between periods and provides a more meaningful predictor of future earnings potential.

Our calculation of CFFO differs from the methodology used for calculating CFFO by certain other REITs and, accordingly, our CFFO may not be comparable to CFFO reported by other REITs. Our management utilizes FFO and CFFO as measures of our operating performance after adjustment for certain non-cash items, such as depreciation and amortization expenses, and acquisition and pursuit costs that are required by GAAP to be expensed but may not necessarily be indicative of current operating performance and that may not accurately compare our operating performance between periods. Furthermore, although FFO and CFFO and other supplemental performance measures are defined in various ways throughout the REIT industry, we also believe that FFO and CFFO may provide us and our stockholders with an additional useful measure to compare our financial performance to certain other REITs.

The table below reconciles our calculations of FFO and CFFO to net loss attributable to common stockholders, the most directly comparable GAAP financial measure, for the three and nine months ended December 31, 2019 and 2018 (in thousands, except per share amounts): 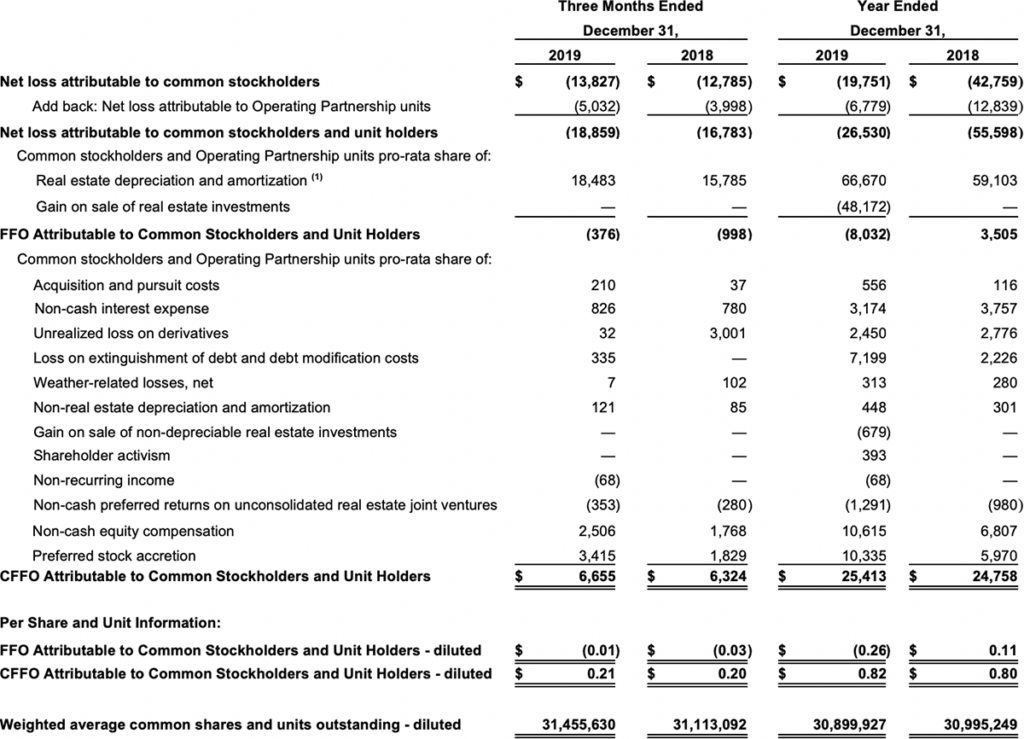 Property Net Operating Income (“Property NOI”)
We believe that net operating income, or NOI, is a useful measure of our operating performance. We define NOI as total rental and other property revenues less total property operating expenses, excluding depreciation and amortization and interest. Other REITs may use different methodologies for calculating NOI, and accordingly, our NOI may not be comparable to other REITs. We believe that this measure provides an operating perspective not immediately apparent from GAAP operating income or net income. We use NOI to evaluate our performance on a same store and non-same store basis; NOI measures the core operations of property performance by excluding corporate level expenses and other items not related to property operating performance and captures trends in rental housing and property operating expenses. However, NOI should only be used as a supplemental measure of our financial performance. 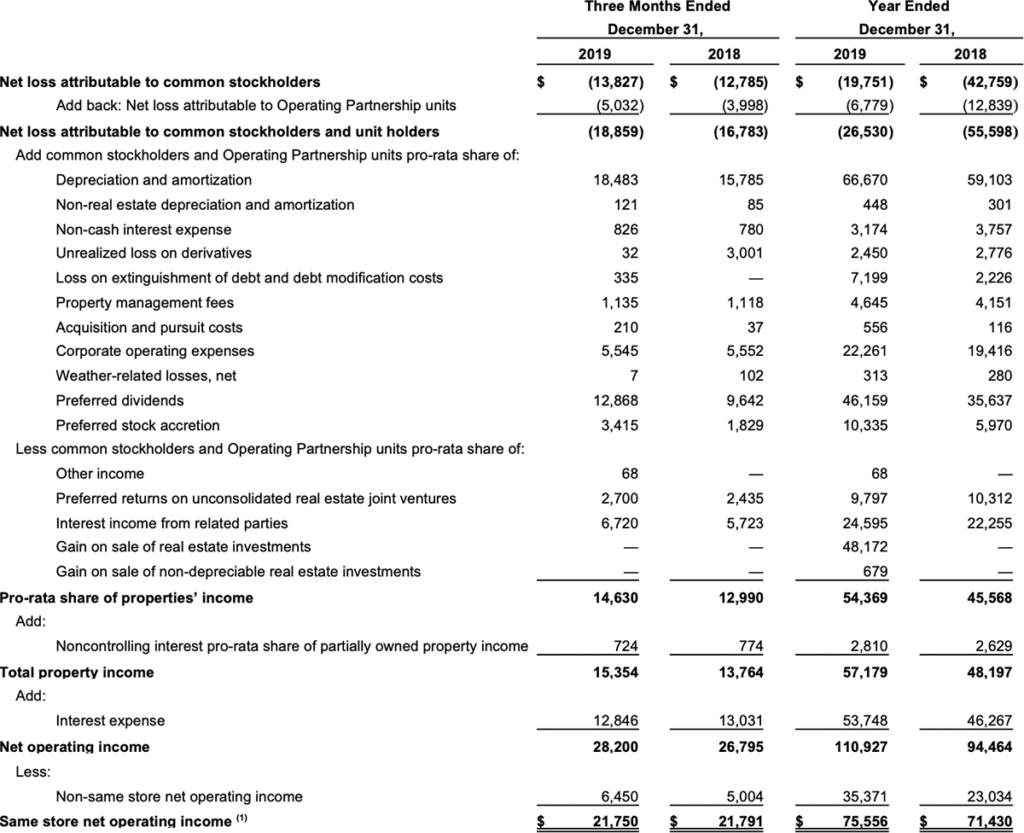