Management Commentary
“We continue to successfully execute on our strategy as we expand our portfolio of high quality multi-family communities and position our platform for long-term growth,” said Ramin Kamfar, the Company’s Chairman and CEO. “We maintain a robust pipeline of opportunities, and including transactions completed subsequent to the quarter-end, we added five operating properties totaling 2,062 units for approximately $315 million. We also further enhanced our balance sheet and liquidity position with continued momentum in the Series B preferred continuous offering raise with third quarter gross proceeds of over $40 million, and the closing of a senior secured credit facility. Finally, we are pleased to have completed the internalization of our management function. We are committed to being a best-in-class organization, which includes having a truly aligned management structure and platform to support ongoing growth.”

Third Quarter 2017 Financial Results
Net loss attributable to common stockholders for the third quarter of 2017 was $12.0 million, compared to a net loss of $2.6 million in the prior year period.

AFFO for the third quarter of 2017 was $3.4 million, or $0.13 per diluted share, compared to $4.3 million, or $0.21 per share in the prior year period.  AFFO was primarily impacted by increases in property NOI of $3.3 million arising from significant investment activity offset by sales of properties, interest income of $2.1 million and offset by interest expense of $2.3 million, lower income from preferred returns and equity in income from unconsolidated real estate joint ventures of $0.6 million, and an increase in preferred stock dividends of $3.1 million.

Same Store Portfolio Performance
Same store NOI for the third quarter of 2017 decreased 0.6% or $0.05 million compared to the same period in the prior year. Same store property revenues increased by 0.9% compared to the same prior year period, primarily attributable to a 1.6% increase in average rental rates offset by a 66 basis point decrease in average occupancy.  Same store expenses increased 3.3% primarily the result of an approximate $0.025 million increase in each of the categories: general and administrative, repair and maintenance, turnover, landscaping, and taxes. The same store results were disproportionately impacted by performance of two assets in the Dallas Fort Worth MSA, particularly our Frisco asset which remains challenged from new supply.  Excluding the two assets, year-over-year same store revenue and NOI increased 3.4% and 4.0%, respectively.

Senior Secured Credit Facility
On October 4, 2017, the Company, through its operating partnership, entered into a credit agreement (the “Senior Credit Facility”) with KeyBank National Association and other lenders.  The Senior Credit Facility provides for an initial loan commitment amount of $150 million, with an accordion feature up to $250 million.  The availability will be based on the value of a pool of collateral properties and compliance with various ratios related to those properties.

Dividend Details
On October 13, 2017, the board of directors authorized, and the Company declared, monthly dividends for the fourth quarter of 2017 equal to a quarterly rate of $0.29 per share on its Class A common stock, payable to the stockholders of record as of October 25, 2017, which was paid in cash on November 3, 2017, and as of November 24, 2017 and December 22, 2017, which will be paid in cash on December 5, 2017 and January 5, 2018, respectively. Holders of OP and LTIP Units are entitled to receive “distribution equivalents” at the same time as dividends are paid to holders of our Class A common stock.

As previously announced, the board of directors is conducting a review of the appropriate Company’s dividend policy for the Company’s Class A Common stock, and anticipates a potential annual dividend range for the Class A Common Stock of between $0.65 and $0.75 per Class A common share.  The board’s evaluation will consider factors including, but not limited to, achieving a sustainable dividend covered by current recurring AFFO, multifamily and small cap peer ratios, providing financial flexibility for the Company, and achieving an appropriate balance between the retention of capital to invest and grow net asset value, and the importance of current distributions.  The board is expected to complete its review of the dividend policy for the Company’s Class A Common Stock in December 2017.

Q4 2017 Outlook
For the fourth quarter of 2017, the Company anticipates AFFO in the range of $0.03 to $0.06 per share. For assumptions underlying earnings guidance, please see page 29 of Company’s Q3 2017 Earnings Supplement available under Investor Relations on the Company’s website (www.bluerockresidential.com).

About Bluerock Residential Growth REIT, Inc.
Bluerock Residential Growth REIT, Inc. (NYSE MKT: BRG) is a real estate investment trust that focuses on acquiring a diversified portfolio of Class A institutional-quality apartment properties in demographically attractive growth markets to appeal to the renter by choice. The Company’s objective is to generate value through off-market/relationship-based transactions and, at the asset level, through improvements to operations and properties.  BRG generally invests with strategic regional partners, including some of the best-regarded private owner-operators in the United States, making it possible to operate as a local sharpshooter in each of its markets while enhancing off-market sourcing capabilities. The Company is included in the Russell 2000 and Russell 3000 Indexes.  BRG has elected to be taxed as a real estate investment trust (REIT) for U.S. federal income tax purposes.

Portfolio Summary
The following is a summary of our operating real estate and development properties as of September 30, 2017: 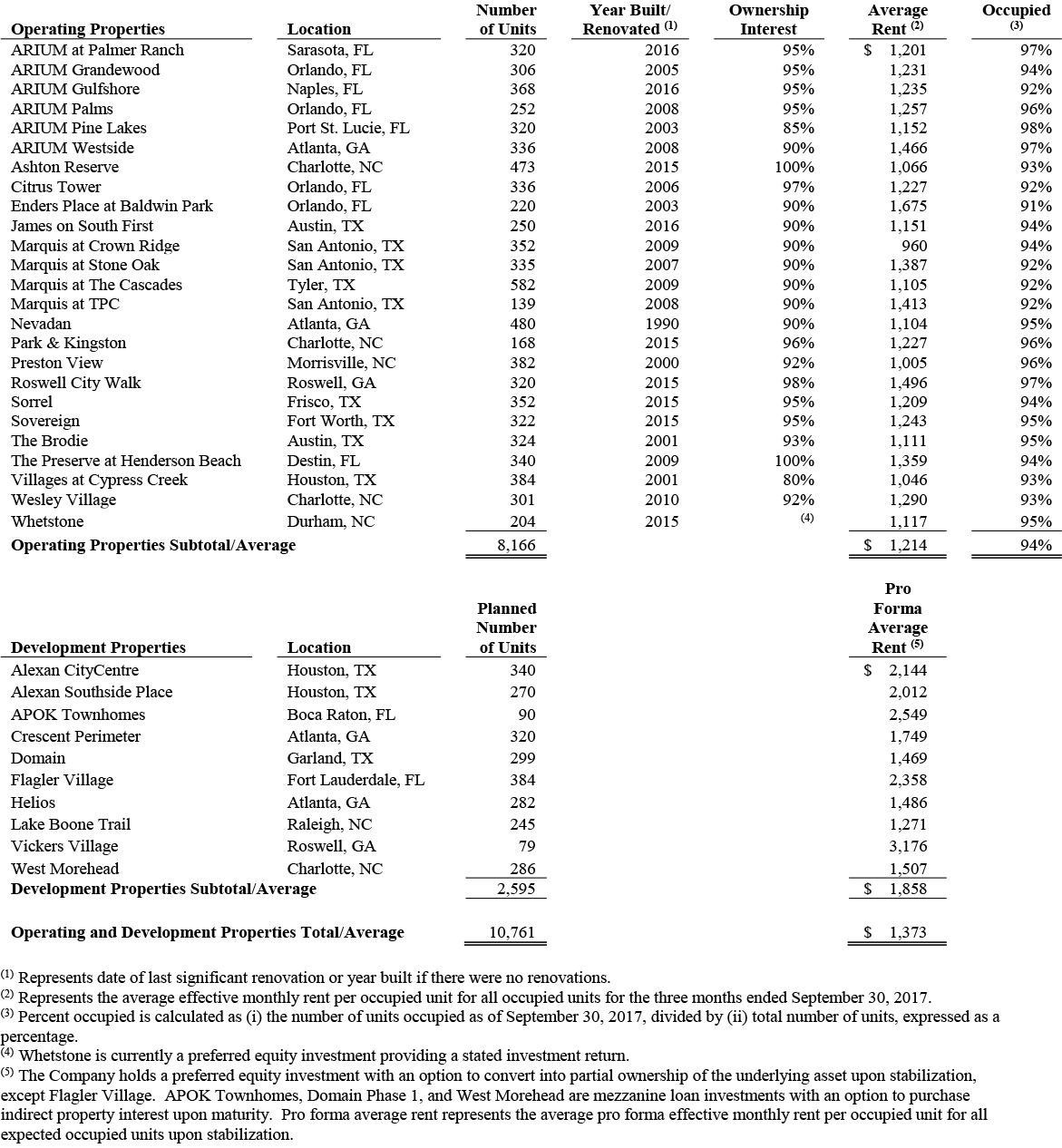 Consolidated Statement of Operations
For the Three and Nine Months Ended September 30, 2017 and 2016
(Unaudited and dollars in thousands except for share and per share data) 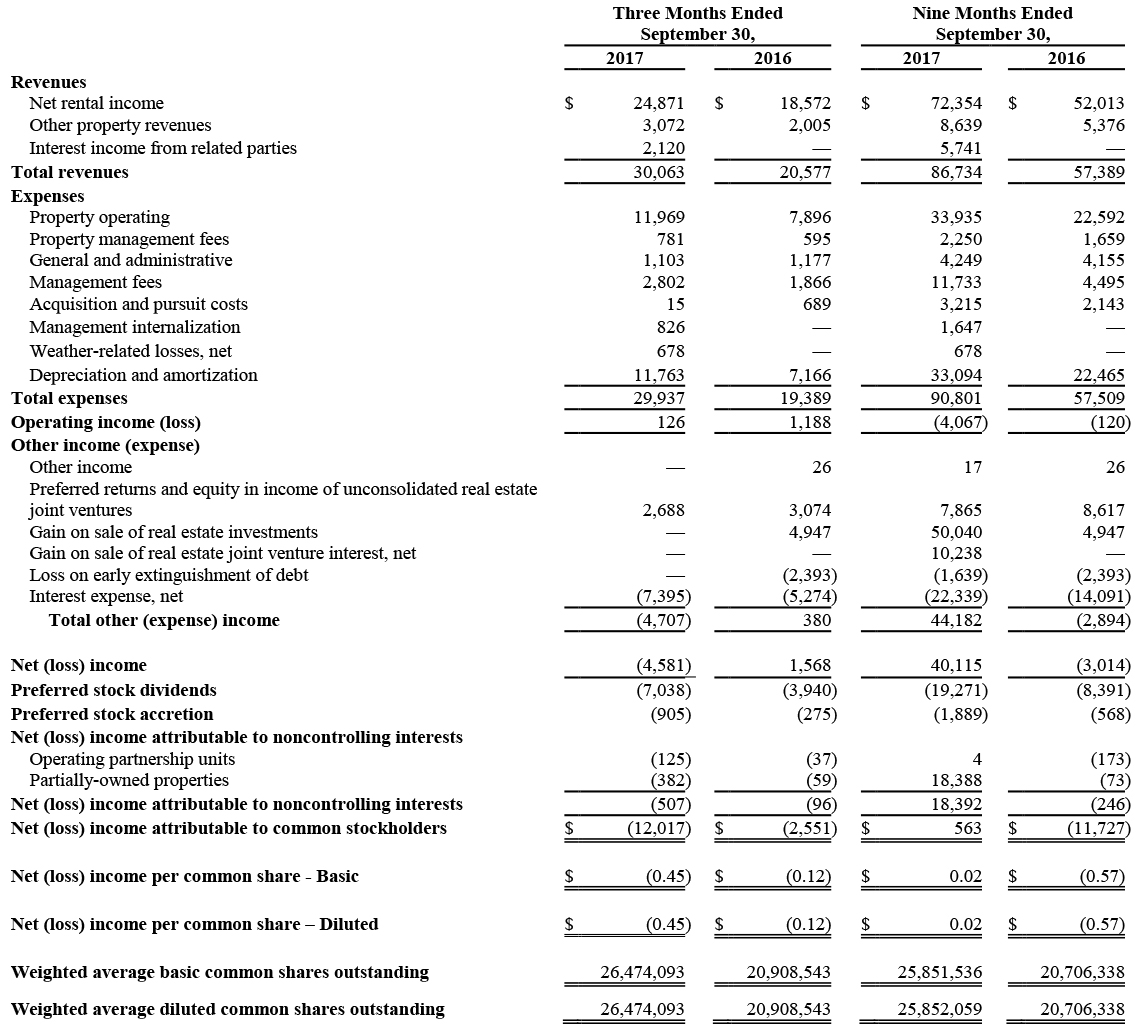 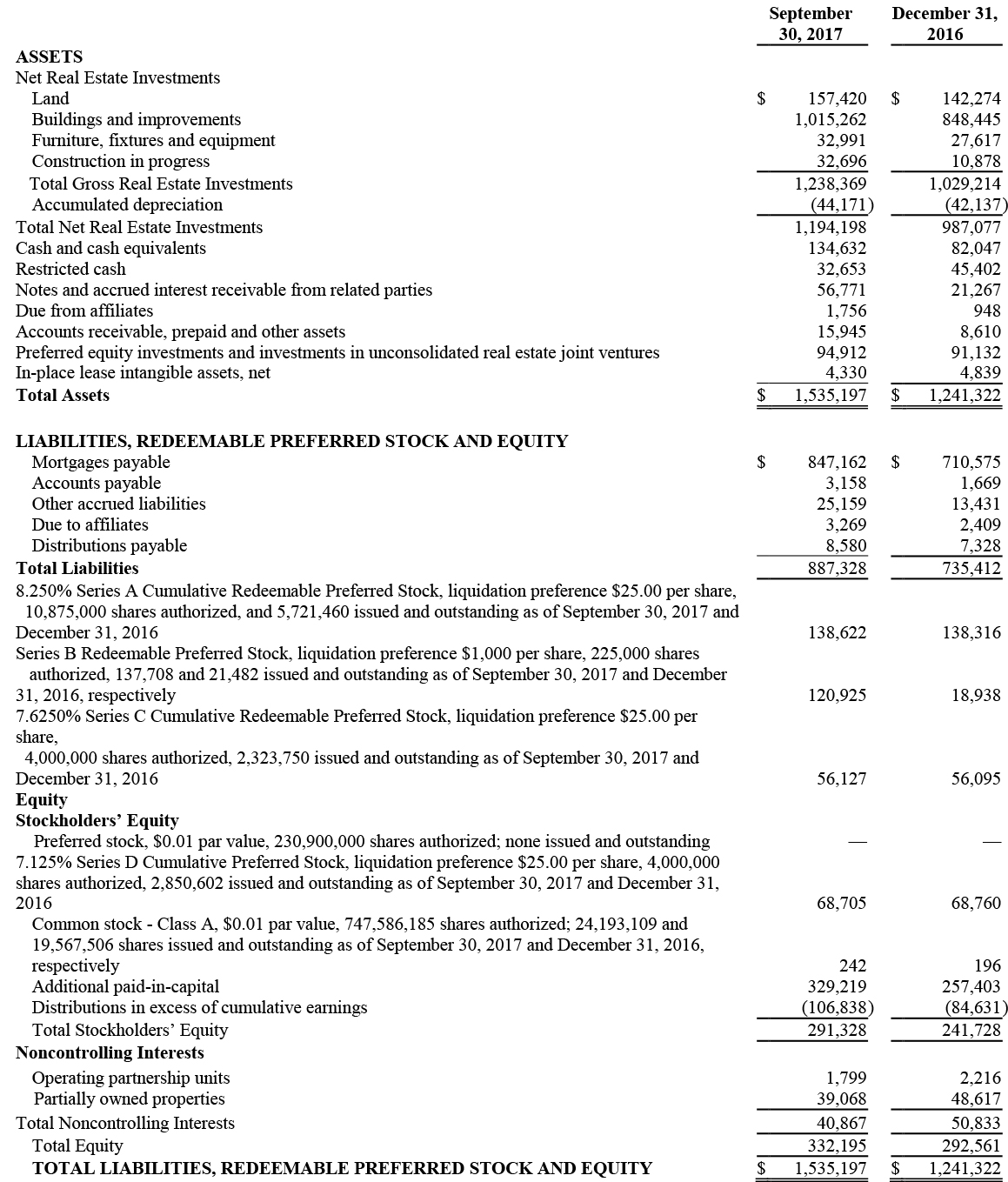 Funds from Operations and Adjusted Funds from Operations
Funds from operations attributable to common stockholders (“FFO”) is a non-GAAP financial measure that is widely recognized as a measure of REIT operating performance. We consider FFO to be an appropriate supplemental measure of our operating performance as it is based on a net income analysis of property portfolio performance that excludes non-cash items such as depreciation. The historical accounting convention used for real estate assets requires straight-line depreciation of buildings and improvements, which implies that the value of real estate assets diminishes predictably over time. Since real estate values historically rise and fall with market conditions, presentations of operating results for a REIT, using historical accounting for depreciation, could be less informative. We define FFO, consistent with the National Association of Real Estate Investment Trusts, or (“NAREIT’s”) definition, as net income, computed in accordance with GAAP, excluding gains (or losses) from sales of property, plus depreciation and amortization of real estate assets, plus impairment write-downs of depreciable real estate, and after adjustments for unconsolidated partnerships and joint ventures. Adjustments for unconsolidated partnerships and joint ventures will be calculated to reflect FFO on the same basis.

In addition to FFO, we use adjusted funds from operations attributable to common stockholders (“AFFO”). AFFO is a computation made by analysts and investors to measure a real estate company’s operating performance by removing the effect of items that do not reflect ongoing property operations. To calculate AFFO, we further adjust FFO by adding back certain items that are not added to net income in NAREIT’s definition of FFO, such as acquisition and pursuit costs, equity based compensation expenses, and any other non-recurring or non-cash expenses, which are costs that do not relate to the operating performance of our properties, and subtracting recurring capital expenditures (and when calculating the quarterly incentive fee payable to our Manager only, we further adjust FFO to include any realized gains or losses on our real estate investments).

Our calculation of AFFO differs from the methodology used for calculating AFFO by certain other REITs and, accordingly, our AFFO may not be comparable to AFFO reported by other REITs. Our management utilizes FFO and AFFO as measures of our operating performance after adjustment for certain non-cash items, such as depreciation and amortization expenses, and acquisition and pursuit costs that are required by GAAP to be expensed but may not necessarily be indicative of current operating performance and that may not accurately compare our operating performance between periods. Furthermore, although FFO, AFFO and other supplemental performance measures are defined in various ways throughout the REIT industry, we also believe that FFO and AFFO may provide us and our stockholders with an additional useful measure to compare our financial performance to certain other REITs. We also use AFFO for purposes of determining the quarterly incentive fee, if any, payable to our Manager.

We have acquired interests in thirteen additional operating properties and three development investments and sold five properties subsequent to September 30, 2016. The results presented in the table below are not directly comparable and should not be considered an indication of our future operating performance. 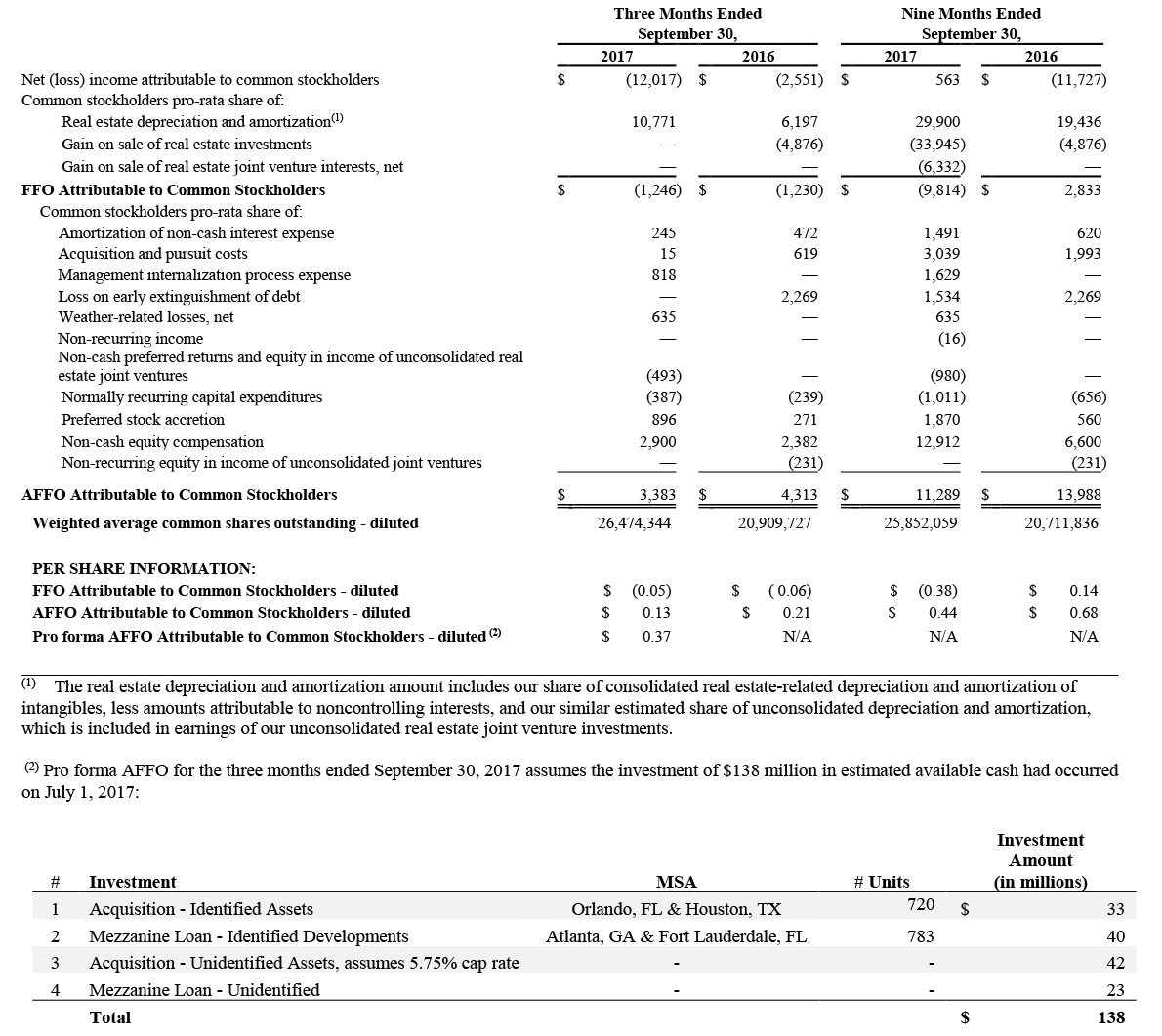 The pro forma guidance is being presented solely for purposes of illustrating the potential impact of these pipeline transactions, as well as future investments to be made with funds we have available for investment, as if they had occurred at July 1, 2017, based on information currently available to management and assumptions management has made with respect to our future pipeline.

Earnings Before Interest, Income Taxes, Depreciation and Amortization (“EBITDA”)
EBITDA is defined as earnings before interest, income taxes, depreciation and amortization, calculated on a consolidated basis. We consider EBITDA to be an appropriate supplemental measure of our performance because it eliminates depreciation and amortization, income taxes, interest and non-recurring items, which permits investors to view income from operations unobscured by non-cash items such as depreciation, amortization, the cost of debt or non-recurring items. Below is a reconciliation of net (loss) income attributable to common stockholders to EBITDA (unaudited and dollars in thousands). 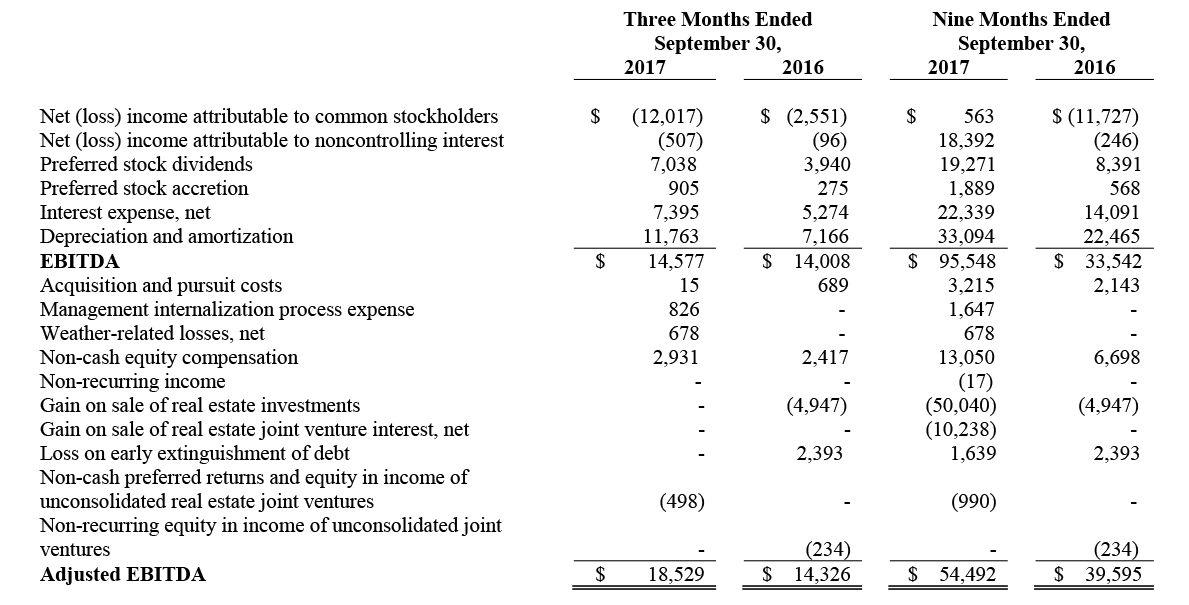 Property Net Operating Income (“Property NOI”)
We believe that net operating income, or NOI, is a useful measure of our operating performance. We define NOI as total property revenues less total property operating expenses, excluding depreciation and amortization and interest. Other REITs may use different methodologies for calculating NOI, and accordingly, our NOI may not be comparable to other REITs. We believe that this measure provides an operating perspective not immediately apparent from GAAP operating income or net income. We use NOI to evaluate our performance on a same store and non-same store basis because NOI measures the core operations of property performance by excluding corporate level expenses and other items not related to property operating performance and captures trends in rental housing and property operating expenses. However, NOI should only be used as an alternative measure of our financial performance.

The following table reflects net (loss) income attributable to common stockholders together with a reconciliation to NOI and to same store and non-same store contributions to consolidated NOI, as computed in accordance with GAAP for the periods presented (unaudited and amounts in thousands): 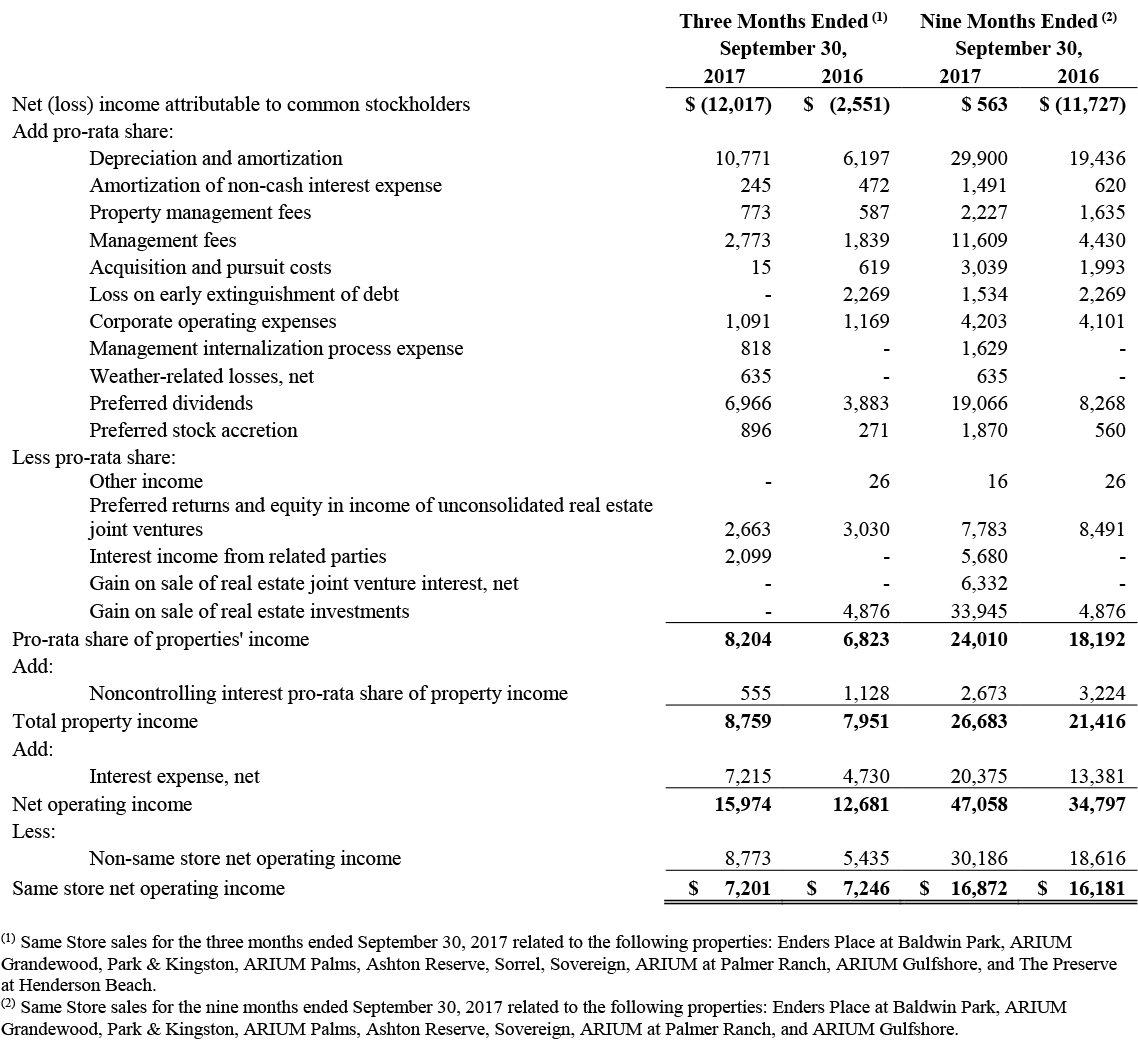